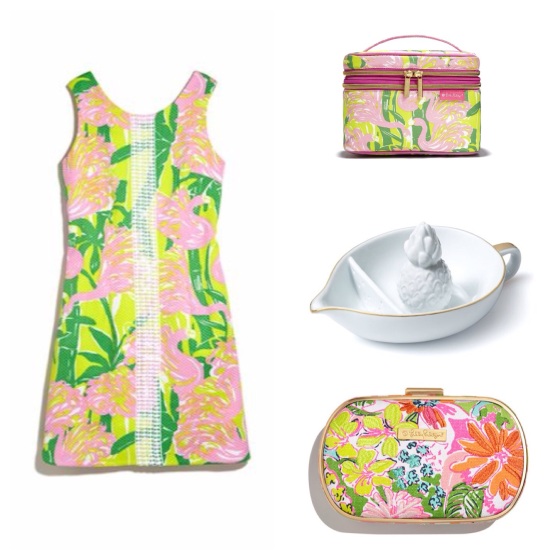 Here’s a recap of what happened yesterday morning, my Lilly for Target haul, plus a final word on #PinkSunday.

After staying up all night waiting for the Lilly Pulitzer collection to launch online, I drove to the Hoover West store in hopes of having better luck. I arrived around 6:15 AM in the pouring rain and no line had formed. Once the weather died down, I hopped out with a book and a piece of cardboard to sit on and made myself comfortable at the front door closest to the Electronic section (both sets of doors would be opened at 8:00, but this set was the quickest way to Ladies Apparel). Just when I began to think I was a little nuts, other cars began trickling into the parking lot. By 7:00 there was a line that eventually extended into the rain as well as one at the second set of doors near the Grocery section.

At 7:30 or so, a store manager came out to ask us not to run once we were let in, and to be kind to each other. We agreed at the front of the line that this would not be an issue. However, three people did attempt to break the line, which I thought was extremely tacky. When the doors were opened, I quickly made my way  toward Ladies Apparel. I never looked back, but I could feel the crush of about 60 people behind me.  I pulled the Fan Dance shift dress I wanted in two sizes and the Nosie Posey clutch I wanted as well, and hustled over to the Beauty aisle to grab the Fan Dance double-zip train case. Then I went back to try on the dresses.  When I came out, I noted the decimated clothes racks and bewilderment of women who’d gotten there late. I handed the dress I didn’t want to a lady who was very grateful, then headed to the cashier. I saw no fighting or crying, but I did see lots of grabbing, some stockpiling and several hurt, disappointed and confused faces. The stock was definitely wiped out within minutes.

After checking out, I drove eight miles to the Bessemer store to look for the Fan Dance round top clutch, but found the Pineapple juicer instead.  I’m ashamed to admit that I drove to two other stores in search of the clutch (with no luck), but at that point I was pretty delirious.

A note on the quality: while some minor details are missing on the shift (lace trim and bra strap holders), I’m happy with what I received. The clutch is sturdy with beautiful embroidery and a vibrant floral design. The train case and porcelain juicer are well-made as well.  I couldn’t care less about someone thinking it’s cheap. I thought the items were cute overall and nicely done at the price point offered. It is a shame Target is not planning to restock so more people can enjoy the collection.

All in all, it paid to get there early (and to have long legs and a strategy). But I’m not sure I will go this extreme again.

Aside from the problems experienced with the website and the hassle of shopping the store, I hated the fact that the quantities were so limited. If you got to the store at 8:00, you could basically forget it. This release brought out the ugly side of a lot of people, fighting and grabbing up things to sell at ridiculous prices elsewhere.  Then there is the faction of Lilly snobs who came out in full force on social media to bash people who enjoy the novelty of these collaborations as well as the democratization of fashion (i.e. whining because Lilly is no longer limited to those who live in exclusive enclaves and have exclusive tastes). On another note, I wish Target would make these launches into “events” with music, food and giveaways for customers who congregate at the store.  It might’ve helped the atmosphere a little. After all, Lilly was famous for her Palm Beach juice stand; they could’ve at least served orange juice!

I say “never again,” for now…at least until the next collaboration is announced. Don’t judge me.

If you stayed up for the Lilly Pulitzer for Target online launch, you may have grabbed items from your wish list from one of the links that were leaked early. Slow hand clap for you! If not, you may have stayed up until the wee hours (waiting for updates and frantically trying mobile links from affiliate sellers via your cell phone) only to end up empty-handed. Target’s website froze and crashed multiple times, items were added to carts only to be removed, and other items sold out within minutes. Do these seven stages of grief sound familiar?

To be fair, this is a “limited edition” collection. And with Lilly’s loyal followers and all the hype, seasoned shoppers knew it would be a free-for-all. At this point your options are to shop your local store (which is probably sold out or close to it), wait for items to show up at rock-bottom prices at Dirt Cheap (yes, that actually happens), give up all together…or spend a bit more and shop at Lilly Pulitzer. Them’s the breaks, kids. For more tips, check out Fashionista.com’s post.

In all seriousness, Target has had well-documented issues with its designer collabo launches before from quality to quantity issues (hello, Missoni and Jason Wu). I won’t start on people who snap up everything and list it at ungodly prices on eBay. To not have plus size items in store this time around is a bad look, and frankly, to hear about a swanky pop-up preview soiree+sale at Bryant Park in NYC is disheartening when there are (were?) so many loyal customers around the United States. Why not really democratize fashion by hosting launches and special events in stores in other cities (such as the Neiman Marcus launch a few years ago)?

This could be a teachable moment for Target from an e-commerce, customer service and social media perspective:

Your thoughts? How was your #LillyforTarget experience?

…to spend the summer in Lilly with Belk!

It’s no secret that we’re big fans of Lilly Pulitzer (the iconic lifestyle brand that began with a Palm Beach juice stand), and tomorrow’s event is a fabulous way to add something chic to your closet!

Thank you to Belk for having me host the Lilly Pulitzer fashion show last Saturday! I am a huge fan of Lilly’s whimsical, distinctive prints and classic silhouettes (as well as the story behind the brand), and it was a treat to wear this Biltmore Maxi Dress ($298).

National Wear Your Lilly Day is June 21, which is the first day of summer! The line’s iconic resort wear and accessories are perfect for lounging by the pool or at the beach and can be worn by jazzy ladies of all ages!

Mad Men is back! Season 6 proved to be a dark and somewhat morbid meditation set at the end of 1967-beginning of 1968 (if you watched, did you catch the reference to the Crimson Tide?) Don’t worry; while I won’t give away any other plot spoilers, I will definitely celebrate the feminine, well put-together style of Don’s ex-wife Betty Draper, and sigh over the direction her wardrobe has taken since their marriage ended.

One of my favorite looks (from a previous season) was this bright floral sheath with white gloves and pocketbook. Proof that what goes around comes right back around, Muse Apparel offers a similar option with its Cut Out Back Bouquet Dress ($144). Florals are a huge trend for Spring apparel, and Muse keeps this look from being too much of a sweet throwback with the cutout detail in the back. The belt also nips the silhuoette nicely. Note that the florals are cast against a softer shade of this season’s “it” color. I love how this look has been paired with a bright shoe, but if that’s a bit too much color for you, you could also wear a nude one.

In news, Lilly Pulitzer – purveyor of fun and feminine floral print designs for over 50 years – has passed.