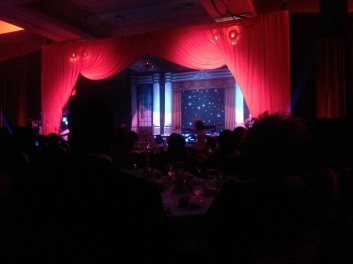 This is the closest I got to Nicole Ari Parker. Sorry!

The view from the audience

This past weekend I had the pleasure of attending one of Birmingham’s premiere social events: “Showtime Birmingham Style,” in support of the Sickle Cell Foundation. The Foundation “was established in 1978 for the purpose of advocating and improving the quality of health, life and services for individuals affected by sickle cell disease and related conditions in central Alabama, while promoting the search for a cure for all people in the world with sickle cell disease.” Executive Director Sharon B. Lewis, this year’s chairwoman Brenda M. Brantley and celebrity host Nicole Ari Parker made this year’s gala a truly magical event.

After a red carpet pre-gala reception, guests enjoyed remarks from Dr. Tim Townes, UAB Chair of the Department of Biochemistry/Molecular Genetics, whose research may lead to a cure for the disease. Next, Fox 6’s Jeh Jeh Pruitt and Mickey Ferguson took the stage as masters of ceremony and ongoing comic relief. After greetings from Mayor William Bell, Congresswoman Terri Sewell and acknowledgments from President of the Board of Directors Michael H. Bell, Ms. Lewis, and Ms. Brantley, guests enjoyed a dinner of barbecue shrimp and grits, Southern fried chicken and sauteed spinach.

This was also a night for fabulous black-tie fashion, and you know I love to get fab for a great cause! So what did I wear? An apricot and cream vintage sequined and belted silk sheath from Dallas’ Rummage Vintage, with a gold snakeskin miniaudiere, and barely-there PVC Manolo Blahniks. I wore my hair in a simple topknot, and for a little pizazz I also tried “junk nails,” which added sparkling embellishments to my manicure.

Surprise guest of the night? Buffalo Bills’ defensive tackle (and former Alabama gamechanger) Marcell Dareus, who made an impromptu pledge of support to the Sickle Cell Foundation, and was sweet enough to pose with me! Isn’t he dapper?

BB&T of Alabama was this year’s title sponsor, and the 2014 “It’s Showtime! Birmingham Style”chairman will be Charlie Waldrep, of Waldrep, Stewart and Kendrick.