Chivalry over swag: a conversation with Enitan Bereola

Thanks to Catfishing, Te’oing, thinking like a man while acting like a lady and watching the parade of  Real Housewives (or Husbands), it’s no wonder young adults today are confused: simply relating to each other and to the opposite sex often seems like a comedy of errors.  In the shuffle of tweets and retweets, reposts, hastily shared Facebook statuses, memes, instant messages and emails, manners and good, old-fashioned home training are often cast aside.  Many have forgotten how to simply be, or how to behave when they can no longer hide behind a smartphone or computer screen.

In true 21st century fashion, I became acquainted with Mr. Bereola through another friend-in-the-head, Demetria Lucas  , who shared his brief wit and wisdom via retweets featuring the hashtag #Pleasantries. Most of them were common sense with a slight twist, others hilarious, but all featured pointed observations about something many neglect: manners. For example:

Mr. Bereola, a FAMU alum who will appear at the University of South Alabama next Tuesday, is a noted Soul Train columnist and the author of How To Be a Gentleman – Bereolaesque: The Contemporary Gentleman & Etiquette Book For The Urban Sophisticate.  He is currently writing a sequel to his first book, entitled Gentlewoman.  His message is simple: chivalry is back. I had the pleasure of chatting with him recently.

On substance over style: “I think [I’m] traditional but unconventional. [My style is] appropriate but inappropriate: class with a bit of an edge.  I say those things because I never trusted a man who was too perfectly dressed. There’s something about a guy who puts too much emphasis on dress that seems like he’s [trying to doo too much].  I’m not perfect and I have flaws. I may wear my tie bar a little crooked.”

On his mission: “My mission is to make the world a better place one gentleman or lady at a time.  People have natural desire to 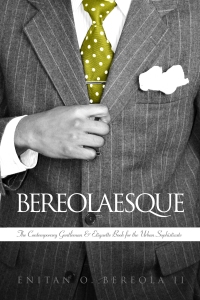 be good, but there aren’t a lot of outlets for people to do that. [We live in a world where]  ‘good’ is corny and ‘bad’ is what’s cool. We kind of grow up with that mentality that you receive attention when you’re doing bad.  Who’s on the news? The straight-A student or the person that just robbed someone?”

Is courtship dead? “It’s on a respirator.  The things is, people are so used to social networking interfaces that they don’t have any personality in real life, [they] can’t converse in real life, they get on a date and they’re a different person. You can be who you want to be via technology; you can say what you want to say and hide behind the protection.”

His inspiration?  “Basketball Wives [laughs]. No I think we all have a  purpose, we’re all born to do something.”

On his signature closing (“Pleasantries”): “It’s almost a mockery of the traditional gentleman. You’d expect him to be uptight; nobody talks like that [nowadays].  Some of the things I say may not be in line with what you may expect a gentleman to say, so you go “Wait, WHAT?” It’s showing you a gentlemen may not be who you think he is; he doesn’t always look a certain way or talk a certain way. A gentleman can be anybody. I’m playing with the audience when I use that word, and opening people’s eyes to the idea that being a gentleman is accessible to anybody.”

You’re on a book tour, you’re finishing a guide for the ladies, you have a Soul Train column and you’re in overdrive on social media. How do you find balance? “Having a good woman and having a family keeps you humble and brings you to reality. I never believe my own hype. As long as you remain human in it all – I take vacations and social media fasts so I don’t get too caught up in that world.   Keeping people close who knew you before is key. Theyll be the first to tell you if you’re smelling yourself too much or remind you of a situation back in the day; you can’t get too caught up in all of it.”

What can the audience at USA expect during your visit? “They can definitely expect to laugh, be entertained and informed.  We’re going to talk about the do’s and don’ts of dating in college, what to avoid and what killed chivalry.  I definitely expect them to enjoy themselves and open up and ask whatever questions they want to ask.”

Don’t miss Enitan Bereola II and “The Do’s and Don’ts of Dating in College” on Tuesday, January 29th at the University of South Alabama’s Mitchell Center, Room 1101, at 7 PM.