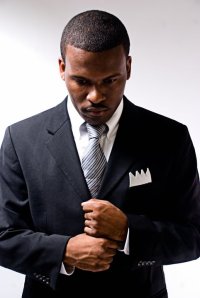 Jarvis Escott, 31, might possibly be one of the hardest working men in Birmingham.  Not only is he President of First Impressions Marketing Group, he’s the cofounder of blacksouthbusiness.com with partner Chaundra Davis.  SCDD caught up with him in the midst of planning a swirl of events surrounding this year’s Magic City Classic.  Read on for the his take on style, personal branding and entrepreneurship in Birmingham.

His worst fashion moment? (Laughs)  It’d have to be the other day: I was meeting someone and I spilled Coca Cola all over myself.  Or one time I had a big meeting and I was rushing so much that I left my belt.  I [had to] keep it moving without it.

What his father taught him about style: [He taught me that] what you wear represents you.   And you are also representing others.  So with me, what I wear represents my family, my home training, and my business…I started a company named First Impressions and I believe in making good first impressions.  [Also] whatever you wear, it’s not what you wear, it’s how you wear it.  Some guys wear suits and [you can tell] they are uncomfortable in them.  Other guys wear them and they walk like [they’re] the CEO, even if they may be the parking lot attendants.

If we peeked into your briefcase, what would we see?  First of all, you’d see my blackberry.  A receipt book.  And a notepad.

What he won’t be caught dead in:  Tight pants.  And pink shirts.  I don’t think I have the confidence to pull that off.  But I could do a pink tie.

On what influenced his career choice:  I think what interested me as far as marketing was when I was a student recruiter at UAB, “selling the university” [to prospective students] and also working as an orientation leader.  Business-wise I would say three people served as mentors and gave me a lot of hands on information:  Sam South, Tanita Cain, and Antonio Minnifield, who used to own Amani Raha.

Why he remains based in Birmingham:  Don’t get me wrong, there are temptations to go elsewhere.  I stay here because I grew up here and I really have learned and grasped the market here.  I’ve learned how to adapt to this market.  [Birmingham is a great place for young professionals] because it’s rebuilding itself after years of being under the old guard of leadership, of people not being able to get along.

His tips for aspiring moguls?  Number one:  believe in yourself when no one else believes in you,  and number two:  establish a good

support network of colleagues and other business owners. When you’re around like-minded people, you’ll [find support].  In terms of promoting events, people make it look easy but it’s not.  The first thing I always tell people is ask yourself if this is something you’d go to.  Second, you need to check the calendar and see if it’s the right time to do it. Next you have to see if it’s the right location.  And of course, the key word is price.  [One of the biggest misconceptions about promoters] is that we’re rich.  Some people get into it for fame, money, and on the guys’ side, to improve their dating life.  People think it’s quick money, but there’s a science to it and you have to have the right formula to do it successfully.

How to strengthen your personal brand?  Pick three people you personally admire.  Study them and learn from the mistakes they’ve made.  For me, I think of Oprah, Diddy, and Kim Kardashian – really the whole Kardashian family – people who put their names on things and it POPS.

Any exciting developments on the horizon? I ‘m really excited about the growth of the new website, blacksouthbusiness.com.  I’m also excited about the new direction I’m going in with First Impressions with doing more entertainment and artist-driven marketing.