Here’s what’s haute: hearing the inspirational testimony of individuals who broke barriers and made history.  Last night was an evening to remember as  Wells Fargo hosted guests at a reception and private  screening of The History Channel documentary Double Victory, followed by a panel discussion with a Tuskegee Airman (moderated by Fox 6’s Steve Crocker).  As a sponsor of both the Lucasfilm production Red Tails and Double Victory, Wells Fargo recognized its own Red Tails, Col. George S. Roberts and Col. James Walker, who were employed as personal bankers with the bank after retiring from the military.  Wells Fargo also presented the Tuskegee Airmen with a donation to further their educational programs.

The documentary features commentary from George Lucas, Red Tails cast members and numerous Tuskegee Airmen who spoke with candor about their experiences.  The individuals who served fought a dual struggle against  fascism abroad and racism and discrimination in the United States, setting the stage for the civil rights movement.  Double Victory captures what Red Tails director Anthony Hemingway calls “an American story” about individuals whom George Lucas identifies as “the knights of the contemporary age.”  Listening to the gentlemen  speak with pride about their place in history and their ability to excel despite the many difficulties and indignities they faced brought history to life.

Guests then had the privilege of hearing remarks from retired Tuskegee Airman Lt. Col. Herbert Carter (who has received both 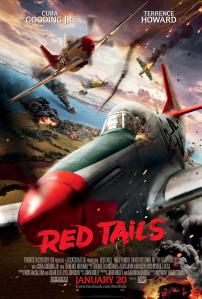 the highest honor France bestows as well as a Congressional Gold Medal) and Col. Roosevelt Lewis, Jr.  (who helps connect youths to the field of aviation and serves as President of the Tuskegee Chapter of the Tuskegee Airmen).  Lt. Col. Carter served as both a squadron maintenance officer and pilot, flying 77 missions and 125 combat hours.  It was a delight to see the gentlemen’s eyes light up and gestures become animated as they vividly recalled the glory of flying P51s, and to hear Lt. Col. Carter recall the 68 “wonderful” years he spent married to his wife Mildred (who was also an accomplished pilot). The audience rose to acknowledge the men with a standing ovation at the evening’s end.

One could only be left to ask the same question Wells Fargo Regional President (Mid-South Region) Leigh Collier posed: “What took so long for us to honor these men?”  While Lt. Col. Carter expressed that he feels the respect due the distinguished Airmen is coming and referred to previous efforts to preserve the history of the Tuskegee Airmen, it was noted by an audience member that the group has never received their own ticker tape parade.  Guest Beth Jerome described the documentary and evening as “humbling,” and if there are any take-aways from last night they are: watch the documentary and visit both the national historic site in Tuskegee and the exhibit at the Southern Museum of Flight.  And if you ever have the opportunity to hear a Tuskegee Airman speak in person, don’t miss it!

Watch a clip of Double Victory:

Images via Wells Fargo and Lucasfilms