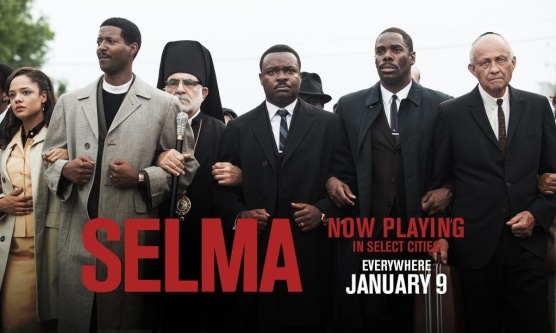 I rarely post on Sundays, but after watching Selma this past Friday I knew I’d have to write a review.

In short, it took my breath away.

Don’t wait for the bootleg or the hook-up. Don’t wait for it to reach your cable’s On Demand option, Redbox, Netflix or primetime cable. GO. Purchase a ticket for a matinée or evening showing and see Selma in a theater, on the big screen.

One, there is something profound about being confronted with the imagery and language at that magnitude in a darkened room. You can’t run from it. You can’t tune it out. Ava DuVernay’s masterwork envelopes you. It sweeps you off your feet and swallows you up from the opening scene.

Second, purchasing a ticket is vital because money talks. The money this film brings in will prove (or disprove) that more stories like it will draw audiences. And we need more stories – more fleshed-out versions of history and full stories about our lives that aren’t caricatures and buffoonery – on the screen.

Yes, some take issue with the film’s characterization of Lyndon B. Johnson. But that doesn’t ruin the overarching theme of Selma. I don’t hear these arguments around films or television shows like Gone with the Wind or Mad Men, pieces of pure fiction which also play fast and loose with historical characterizations (and I say that as a fan of both). If you want to review the historical record, I suggest consulting a textbook and cross-referencing it with other documents and accounts in the record (and one should even be careful there). Yes, you won’t hear Dr. King’s real speeches (due to his estate’s wishes). But DuVernay’s “reimagining” of his words doesn’t detract from the film’s emotional power. Kudos to her for also prominently featuring several of the women who were actively involved in the civil rights movement.

This film is beautifully written, acted, directed, costumed and set to music. It is like watching history unfold in front of your eyes in a way that Mad Men does: it makes you believe you have stepped back in time. Without giving the movie away, the portrayal of the relationship between Dr. and Mrs. King was refreshing and felt…authentic. You get a sense of their dynamic and their charisma, but also of the realities of their relationship. DuVernay handles sensitive subject matter masterfully: whether the scene conveyed loss, shame, heartbreak, fear or righteous anger and indignation (sometimes in rapid succession), I felt it right along with the characters.

Beyond that, Selma subtly and cleverly will make you think deeply about the situation the world is in now and wonder why collective efforts to organize or address these issues and create lasting change have failed. I think everyone should see it; however, it is rated PG-13 and includes graphic violence, so parents should think carefully about making that decision for their children.

What are you waiting for? Selma is now playing in theaters nationwide.

Watch the trailer by clicking HERE.