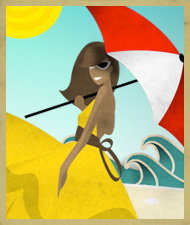 I had the occasion to be a damsel in distress last week.  After driving a little over thirty miles with an “Add 1 Quart of Oil at the Next Service Station” message flashing on my dashboard, I finally got wise and pulled over at the first rest stop outside of Birmingham.  I’m not fond of rest stops, having always imagined people get killed or accosted at them. But it was daylight and I was desperate, and I figured a rest stop was better than flailing in the middle of I65-S, so I stopped.

I popped the hood, jumped out to remove a container of oil from my trunk and ran to the front to attempt to remove the cap covering the spot where the oil goes.  The fact that I don’t know what that “spot’s” technical name is should tell you a lot about how much I was equipped to be pouring the oil in.  I twisted it, I turned it – yes, I cursed it – but I couldn’t get the thing off.  (And yes, I have AAA, but in the heat of the moment I didn’t stop to call them.  Shame on me.)

A woman was nearby, walking a little dog and talking into a cell phone.  She eyed me (curls flying, dressed in black from head to toe, grimacing and generally looking frazzled) and made her way over.

“Do you need some help, dear?”

Well, I did.  But before I could politely decline (I have a college degree; surely I can pour some oil, right?) she took over.  Examined the situation.  Sounded dismayed when I noted there was no dipstick  to measure the amount of oil.(Okay, I know that much!)  Then she struggled with the cap herself. And finally she called her son – a mechanic who works on my model of car – to get his advice.  I imagined he fussed a little at her for getting all up in a stranger’s business, but she paid him no mind.

As we stood commiserating and debating what to do next, a car pulled up.  The window  rolled down.  A distinguished-looking couple peered at us.

“Do you ladies need some help?”

The man – who later introduced himself as Mr. Larder –  parked and  got out, then proceeded to unscrew the cap, pour in the oil, and (gently) suggest that I head directly home and get an oil change.  After I thanked the three of them profusely and nearly wept from relief, he mentioned that he thought the woman and I were mother and daughter traveling together and in need of assistance.

“Oh – I’m from Kentucky,”  laughed Ms. Dale. “I don’t know her at all!” And after making a little small talk (the other pair of rescuers were from Florida), we soon were all back on the road.  And I made it home safely and without further incident (where yes, I got an oil change).

It was mildly humorous to me that the gentleman thought Ms. Dale and I were related.  I’ve got what could be considered a year-round, permanent tan, and she is White.

The South sometimes (justifiably) gets a bad rap.  Some of us poison trees, some of us try to turn a great local park into a scene from Boyz in the Hood, and others “stand their ground.”  But I was encouraged to see that three individuals (who obviously missed John Derbyshire’s memo warning against being Good Samaritans to stranded Black drivers) didn’t mind extending themselves – delaying their own travel and schedules – to help a person in need.  And it was a good reminder to me to look past the obvious differences we have in order to see what we have in common, much like Mr. Larder did.

That will always be in style.

One thought on “Traveling Mercy…”