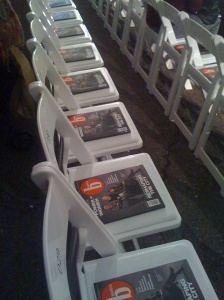 Only for the love of fashion would I stand up for three nights' straight.

One blistered heel. Ten cramped fingers. Three nights in a 40″ by 140″ tent in make-your-teeth-chatter-and-knees-knock weather.

No,  I didn’t spend the past few nights camping; I covered the second annual Birmingham Fashion Week, with a portion of the proceeds benefitting Camp Smile-a-Mile and Alabama Forever.  It was my first fashion week anywhere, EVER and what I learned in the tent is that next year, I’ll make sure we have seats. I didn’t rock shades a la Anna Wintour, and I wasn’t so much of a rube that I held up numbered cards to rate the designs, but every night I was left breathless by the energy, the generosity, and the sheer creativity I witnessed from members of the beauty industry, the models, the designers, and the audience.

It may not be New York, but then why would we want it to be?  Not to get on my soapbox, but I’ve lived here long enough to grow tired of the comparisons between Birmingham and just about every other city.  It was nice to see us step up and (literally) strut our stuff for a change.

“It’s hard to show your inner heart and be judged,” BFW co-founder Heidi Elnora admitted before the finale began.  Although she was referring to the pieces preparing to march down the runway, she could have been talking about any of the million other dreams people have but never follow through on because they’re afraid.  As Hayden High School art teacher Amy Cutcliffe emphasized, “Everybody has something [to share creatively].” BFW gave many – myself included – an opportunity to do that.

Was everything about the event perfect? No.  But that’s not the point.  The show’s mission – to bring together our community – delivered. There was pageantry, there was drama, and for three nights, people from different ages, backgrounds, aesthetics and perspectives commiserated and celebrated in the name of fashion.  Not to be missed: Brandon Wayne giving us FASHION as he emoted down the catwalk, Ashley Davis’ perfected “smize,” and Marcella Bailey’s infectious cheering from the sidelines. I’m no Pollyanna, but I left feeling that some very talented people brought everything they had to give and left it on the catwalk.

I, for one, feel richer for it…and am already marking my calendar for BFW 2013.